Music in The Master and Margarita


Master and Margarita is a complex book with many levels and themes. One of the aspects of the book that endears it to me is both the use of music as a leitmotif and as a link to the literary references that inform the books and provides yet another referential layer. The following are some of the more important musical references.

The most important musical reference links with the title and one of the major literary influences on the novel. That is in Chapter 7 when Woland appears to Stepa Likhodeev and says "Here I am!". This line, which was also considered by Bulgakov as a title for the whole novel, is a quotation from Gounod's Opera, Faust. In Act 1, Faust, in despair in his study, calls on Satan to appear. Perhaps even more important is the name, Margarita, which is a clear reference to Faust's love interest in the first part of Goethe's drama and who is also the important love interest in Gounod's opera which focuses exclusively on the first part of the drama.
Yet, there are other important musical references including Verdi. In Aida, the refrain "O gods, gods..." runs through Master and Margarita like a leitmotif. It is probably taken from Verdi's opera Aida, which Bulgakov knew and loved and quoted in other works.

Another instance can be found in Chapter 4, where Ivan is accompanied through Moscow by music from Act 3, Scene 1 of Tchaikovsky's opera Eugene Onegin, based on the novel by Pushkin. This is a ballroom scene, in which Onegin meets Prince Gremin, who has married Tatyana, with whom Onegin previously flirted.
The musical references extend to the names of some of the many (this is a Russian novel) characters.  There are significant characters with the names Berlioz, Rimsky, and Stravinsky.  This aspect overlaps with the many instances of humor in the novel of which I will discuss in another entry. 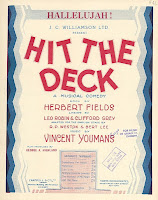 Finally, even American popular music is enlisted by Bulgakov when Hallelujah!, the song by the American Vincent Youmans is played both by the jazz band at Griboyedov and by the band at Woland's Grand Ball. Youmans claimed the melody was one of his first ever.
He wrote it in his days at a Naval Training Station, and it was performed by John Philip Sousa as a march. The English lyric, written by Leo Robin and Clifford Grey, includes the lines "Satan lies a waitin' and creatin' skies of grey, but Hallelujah! Hallelujah helps to shoo the clouds away!" Youmans introduced "Hallelujah!" in Hit the Deck (1927) by vaudeville star Stella Mayhew.
That music informs and deepens the enjoyment of The Master and Margarita is yet another aspect of its standing as a twentieth century masterpiece of Russian literature.

The Master and Margarita by Mikhail Bulgakov. Penguin Classics, 1997 (1966)