Magic and Dreams in the Night

The lunatic, the lover, and the poet
Are of imagination all compact.
One sees more devils than vast hell can hold,
That is, the madman: the lover, all as frantic,
Sees Helen's beauty in a brow of Egypt:
The poet's eye, in a fine frenzy rolling,
Doth glance from heaven to earth, from earth to heaven;
And as imagination bodies forth
The forms of things unknown, the poet's pen
Turns them to shapes, and gives to airy nothing
A local habitation and a name.
Such tricks hath strong imagination,
That if it would but apprehend some joy,
It comprehends some bringer of that joy;
Or in the night, imagining some fear,
How easy is a bush supposed a bear!
- Act V, Scene 1

My introduction to this play was through music, as was so much of my introduction to the world of literature, when I purchased an Angel Stereo recording of the incidental music of Felix Mendelssohn. His delightful overture, the fairy music, scherzo, and wonderful wedding march are still among my favorite music as is much of Mendelssohn's oeuvre. But since then I have read the original play and seen productions by  Kenneth Branagh's Renaissance Theatre Company when it visited Chicago in the early 1990s and, more recently,  Chicago Shakespeare Theater. 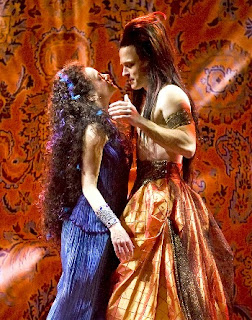 With this background it was with great anticipation that I returned to Chicago Shakespeare Theater this week for the current production of this play, hoping to be surprised or entertained or perhaps even mesmerized by the magic of Shakespeare's play. I was not disappointed in the production as directed by Gary Griffin. The performance was dazzling with perfection in the staging, pacing, and acting. While every actor performed well, the standouts for me were Ron Orbach as Bottom who almost stole every scene in which he appeared, Timothy Edward Kane who was gorgeous as Oberon (pictured on the right with Tracy Michelle Arnold as his Queen Titania) and stately as the Duke, and his lieutenant Puck played with magical whimsy by Elizabeth Ledo. With the rest of the cast not missing a line or a step the performance flew by and left the audience with much laughter and delight. I truly appreciated the understated elegance of the set and visual aspects of the production that first and foremost featured Shakespeare's wonderful language.
Posted by James at 12:21 PM