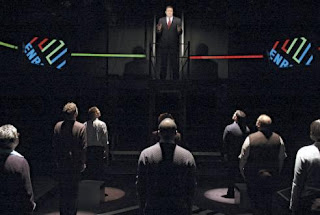 A week ago I visited the TimeLine Theatre to see the current production of the 2011-2012 season, another Chicago Premiere. History, as presented in Lucy Prebble's play Enron, was close to current events, much as it was last year when TimeLine Theatre Company brought us In Darfur. I enjoyed Enron as it came alive in the intimate, in-the-round production at TimeLine Theatre. Rachel Rockwell directed with controlled staging while the primary actors all impressed me with stirring performances. This was a play without real heroes, although Bret Tuomi's portrayal of Jeff Skilling came across as the anti-hero of the piece, giving leadership a bad name as he directed the executives including the weasel-like accountant Andy Fastow (Sean Fortunato). The CEO Ken Lay was portrayed in a convincingly 'hear no evil-see no evil' manner by Terry Hamilton (one of my favorite of TimeLine's Associate Artists). The business-like pacing of the production production, plus a set that gave you the feeling that you were there back in the nineties, and delicious touches like board members as blind mice and CFO Andrew Fastow’s “raptor” debt shelters as actual velociraptors made the afternoon quite entertaining.
I wish I could praise the dramatic material as much as the company, but I did not see much depth or nuance in the play. Rather, even under the controlled hand of Rockwell's direction, it was a expository tale without the necessary underpinnings to provide insight into the criminal behavior, beyond the stereotypical greed of businessmen. I hope that somewhere there are playwrights willing to go beyond this type of simplistic drama. That the  TimeLine Theatre Company was able to fashion an entertaining production from this material is further evidence of their artistic excellence.