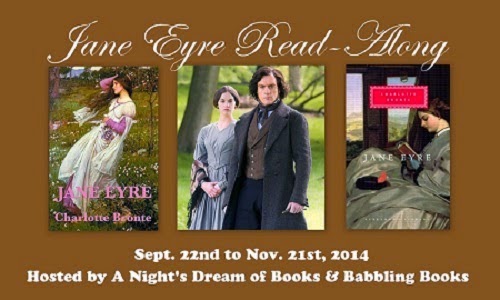 Welcome to the fourth week of
the 2014 Jane Eyre Read-Along,
brought to you by
A Night's Dream of Books
and Babbling Books!!

Jane has settled in to her life as Governess at Thornfield Hall.  However, in spite of the presence of Mrs. Fairfax and Adele with her maid, she finds the Hall a place of "stagnation" and "silence";  her room is "lonely" and Mrs. Fairfax merely "tranquil".  All this changes with the arrival of Mr. Rochester:  "I discerned in the course of the morning that Thornfield Hall was a changed place.  No longer silent as a church, it echoed every hour or two to a knock at the door or a clang of the bell.  Steps, too, often traversed the hall, and new voices spoke in different keys below.  A rill from the outer world was flowing through it.  It had a master;  for my part, I liked it better."
Jane had yet to formally meet that master, her master; she would find even more changes about to occur.

Jane meets her pupil, Adele Varens, in Chapter 11, and we learn more about her in subsequent chapters. How is this little girl contrasted with Jane herself, when she was a child?

Adele is also an orphan whose mama has passed on, but in many ways she is very different than the young Jane.   When we are introduced to her she is quite capable of singing and fluent in French, but seemingly undisciplined.  Jane finds Adele "docile, though disinclined to apply"  and that is certainly not like the Jane that we met in the opening chapters.  She also seems spoiled as evidenced by her preference for Mr. Rochester because he gave her "pretty dresses and toys";  but despite his kindnesses he has brought her to England and then left her there.  We later find that while she has "no great talents" she neither has "any deficiency or vice".   That Adele is willing to learn is more due to Jane's ability as a teacher than it is due to Adele's intelligence or perseverance.

How does Bronte set the general atmosphere surrounding Jane's  awkward meeting with Mr. Rochester, in the country lane, which takes place in Chapter 12?

It was January and "It was a fine calm day, though very cold".  Jane narrates that she offers to post a letter for Mrs. Fairfax and she shares the description of a landscape that is noted for its "utter solitude and leafless repose".  The sun is fading as the day is dying as she pauses on her journey.
As the sun goes down the moon appears and betrays an evening calm.  This sort of solitude and calmness might not seem eerie if we hadn't been introduced to the strangeness of Grace Poole and her laugh only a page earlier.  The result for Jane is a conflation of nightmare and reality as Mr. Rochester and his horse come upon Jane.  As he passes her the realization that the black form is just a man breaks the spell, but the experience adds to momentousness of the occasion and leaves a special mark on Jane and the reader.

Jane states that she would not have offered her help to the fallen rider, had he been conventionally handsome. What does this tell the reader about Jane?

I am not sure what to make of this other than an indication of a sort of prejudice Jane has toward the outward appearance of beauty in others.  Given her experience thus far this is not surprising as she considers herself to be plain and her experience with those who flaunt their beauty such as Georgiana Reed was quite unpleasant.

What further information about Jane's personality, and her philosophy of life, do her paintings convey?

Jane's own description of the paintings reinforces her humility and her inability to translate the true power of her imagination to the painting.  That her imagination seems very dark is demonstrated by the first painting which highlights a lone cormorant and a drowned corpse. The other two paintings continue with a  theme of bleakness, cold, and in the third, an eye notable for its "glassiness of despair".  While Jane claims to have gotten pleasure out of the experience of painting these, they seem to betray a bleak outlook on life.  She claims to be tormented by her inability to realise what her mind's eye saw;  and Mr. Rochester suggests it is due to her lack of artist's skill that she only portrays a "shadow" of her thought.  What thoughts may they be?  She seems to be storing up the dark side of life in her mind so that she might better be able to handle the realities of her daily existence.

What do you think is the real purpose of Mr. Rochester's interview of Jane? Or do you think it's the typical interview an employer would conduct, when hiring a new domestic employee?

Mr. Rochester's interview starts more as a probing of Jane's thoughts in an attempt to discern her character.  It is a strange way to conduct an interview and it tells us as much about the interrogator as it does about the interrogatee.  His is almost a teasing manner as in "Did you expect a present, Miss Eyre?  Are you fond of presents?"  He is as willing to compliment her (regarding the progress of Adele) as he is willing to criticize her (as to her piano-playing).   By the the end of the lengthy tete a tete he has a detailed picture of this young governess, but we have seen a man whose hardness, strong opinions, and harshness may be a facade hiding someone who is in search of companionship.  Perhaps there are even more secrets that he is hiding beneath this firm facade.

Do you see any hints of foreshadowing in Chapter 14? Please explain.

Chapter fourteen seems to contain the seeds of mystery and intrigue.  Why do I say this?  We have already experienced, through Jane, the isolation of Thornfield Hall and the strangeness of Grace Poole with her even stranger, eerie laugh.  But now, we have Mr. Rochester telling his story, at least parts of it, with the admission that fate had "wronged" him and he had not the "wisdom to remain cool."  It is a story told in a way that bewilders Jane.  She says "Your language is enigmatical, sir:  but though I am bewildered, I am certainly not afraid."  What might occur in the future that would challenge Jane's present courage  we do not know;  but the idea is placed in our mind that we will find out more about the enigmatic Mr. Rochester.  He sees in Jane a "restless, resolute captive" who "were it but free, would soar cloud-high."  He on the other hand has seen better days and has only his claim to be of good intentions to give him hope for the future.  This chapter has heightened the Romanticism of the novel and suggested much more intrigue is in store.
Posted by James at 3:06 PM

Thanks again for participating james.

I think that you raise an important point as to just how "momentous" the scene where Jane and Rochester meet is and how effectively that is was conveyed.


Rochester's "shadow of a thought" comment was of course important. I really like the words that Bronte has given him to speak here,

Thanks for your observation about the momentous occasion for Jane and Rochester. I liked the way Bronte doubled the meeting with the second formal meeting at Thornfield Hall. Chapter 14 gives the reader may things to think about for the coming chapters.

Very interesting points here, James!
I really like your observation that the Grace Poole incident, in which Jane first hears the strange laugh, took place just one page before her first meeting with Rochester in the country lane. Certainly this would have predisposed Jane to dwell on the magical and otherworldly.
You are also quite right in stating that, given Jane’s experience with ‘beautiful people’, she would not tend to find good looks impressive. She’s far more interested in the real person within.
As for the very strange interview and hints of foreshadowing, they reveal much about Mr. Rochester, while at the same time, leaving the first-time reader still puzzled about the true nature of his thoughts and actions.
Thanks once again for your participation!! : )

Ooh! I love your response about the interview question. I was having a hard time wording my response for this, but you answered yours very nicely.

I agree that all the interrogation questions show many signs of what Mr. Rochester's character is like. It also shows that he is secretly hoping for companionship.

Thanks for your kind comments. It seems from his interrogation and Chapter 14 that there is much more we will learn about Mr. Rochester.

Thanks for you observations and for hosting this on-line discussion of such a great novel.
Jane's personality and way of thinking becomes more fascinating. She has more than a modicum of common sense, but also misses things due to her own personal prejudices.
Rochester's own thinking is masked by his behavior and by the peculiar lens of our beloved Jane.