Witches and Devils and a King

Just in time for Halloween I have chosen two Histories and a Screenplay to share - I hope you will agree that the themes are appropriate.

The Devil in Massachusetts:
A Modern Enquiry into the Salem Witch Trials
by Marion Lena Starkey

This is a riveting account of the Salem Witch Trials. Marion Starkey includes just the right amount of detail to portray all the elements of this horrifying story. From the hysteria spun out of fanaticism to the economic and social background that provided a fertile ground, the events unfold in a way that kept this reader spellbound. The author highlights the relationships of the people in the community and how their bonds were broken by the reactions of the accusations of the young girls. This was well before the era when hysteria was diagnosed as a psychiatric disorder, thus it seems that the townspeople had fewer coping mechanisms when the emotions went out of control. Neither Church nor Civil authorities were able to maintain control and their actions probably aggravated the crisis. There may be more recent accounts that cover more details, but this is the classic telling of this tale of witchcraft and evil.

A Coffin for King Charles
by C.V. Wedgwood

In January 1649 an English King was brought to trial on a charge of abusing the trust placed in him by his subjects, was convicted, and was publicly and ceremoniously beheaded, after which the Monarchy was abolished and a Republic proclaimed. Nothing like it had ever happened in European history before. For a thousand years Englishmen had been in the habit of murdering tiresome or inconvenient kings—the most recent examples being Richard II, Richard III, and Edward V—but never before had an anointed king been formally brought to book. Enter Dame Cicely Veronica Wedgwood -- a scholar of unimpeachable diligence and accuracy, she also possesses the double literary gift of lucid exposition and brilliant portrayal (In 1946 she translated Elias Canetti's Die Blendung, as Auto-da-Fé, under Canetti's supervision.).
Her short book is a study of how and why this extraordinary event took place, by whom it was conceived and carried out, by what arguments it was justified at the time, what pressures were brought to bear, and what was the effect upon the future would be a work of the greatest interest and importance.
Miss Wedgwood explains that “it is the purpose of this book to describe the events of those ten weeks” leading up to the execution. She tells the story supremely well.


The Doctor and the Devils
by Dylan Thomas 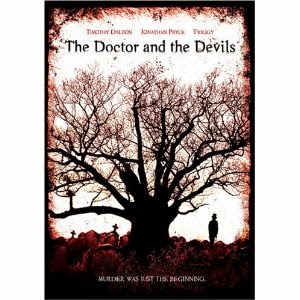 The Doctor and the Devils is a screenplay that deals with death. And "statements on the way to the grave " is how Dylan Thomas described his poetry. It is a incursion into the depths of life, the business of grave-robbing, that is so low as to suggest the possibility of killing the living to provide a supply of corpses. What moved these people to do this? There was a medical need in the era that the play is set so that is a primary possibility. I am not sure what is so fascinating about this dark story, but Dylan Thomas based this drama on real life and it shows - I found the drama both engaging and poetic.
Posted by James at 10:26 AM

These are fascinating looks books.

I read a few books on the English Civil War and even took a glass on that era in English history a very look time ago.


That era is so interesting and Wedgwood's take looks to be worthwhile. I will try to give this one a read.

The Devil in Massachusetts is going on my Want to Read list. Looks great!

The Wedgwood book is amazing in its efficiency. A short book that illumines an important moment in history.

The Devil in Massachusetts is a great book on this topic. I have read and reread it over the years.