Complexities of Love and War 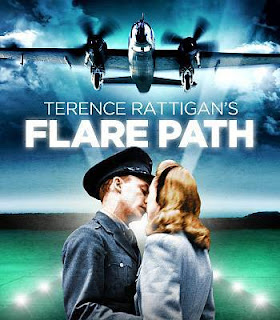 
"The title of the play refers to the flares that were used to light runways to allow planes to take off and land but the flare paths were also used by the Germans to target the RAF planes." (BBC Radio 3)

Years before I was born in a small town in Wisconsin my mother-to-be was living in Alexandria Virginia, a suburb of Washington D. C.  The year was 1942 and as it slowly faded in to the next year my father, whom she had married earlier that same year was in the Army Air Corps on his way to the Southeastern Pacific islands.  He would not return for several years, but I wonder how often my mother spent her evenings poring over his letters home with secret fears  that his return would never occur.  I attended a play yesterday afternoon that laid bare similar emotions of three British couples along with more complex feelings arising from the complexities of love relationships.
These relationships and emotions were dramatically portrayed by a skilled ensemble of actors in a production of Terence Rattigan's play, Flare Path.  Based on his own experiences in the RAF, this play, written in 1941 and first staged in 1942.  Set in a hotel near an RAF Bomber Command airbase during the Second World War, the story involves a love triangle between a pilot, his actress wife and a famous film star.  It was his first successful serious drama and first commercial success since the mid-1930s.

The play portrays the impact on three couples of the demands on the fliers who leave, perhaps never to return, and their wives and lovers who wait for their return.  Of the three couples, one is a young sergeant whose working wife is visiting for the weekend.  Another is a Polish emigre Count who has married a British bar maid so that he may join the fight against the Germans.  And the third couple is a young Lieutenant who is facing his own demons and is unsure if he is a worthy mate for his wife, one Patricia Graham, an actress from London, who has something of her own to tell her husband Teddy, the  bomber pilot. The situation is complicated when Peter Kyle, a Hollywood film star, arrives at the hotel, and Teddy is sent out on a night raid over Germany. Patricia is torn between a rekindled old flame and loyalty to the husband who relies on her for support.  The tension mounts as the the night moves into morning and the fliers begin their return.  Rattigan effectively ratchets the emotional tensions and the suspense upward until the climax.
Griffin Theatre Company produced the play and it was directed by Robin Witt.  The ensemble was uniformly excellent in their respective roles.  In particular I enjoyed the performances of Vanessa Greenway as the wife of the Count and Darci Nalepa as Patricia Warren.  Joey deBettencourt was outstanding as he brought believable emotional tension to his portrayal of Bomber Pilot Teddy Graham.  The cast was brought together under Robin Witt's direction which captured the drama that Rattigan poured into this, one of his best plays.  Also worthy of mention was the set designed by Joe Schermoly whose underscored the soaring emotional drama with soaring details of wall and stairs.  I am glad I experienced this fine Griffin Theatre production and may add it to the many Rattigan plays that I have enjoyed over the years.

*Photo above, right: Terence Rattigan in London in 1948.