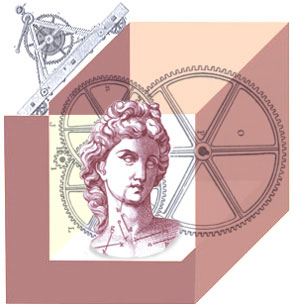 "Each famous author of antiquity whom I recover places a new offence and another cause of dishonor to the charge of earlier generations, who, not satisfied with their own disgraceful barrenness, permitted the fruit of other minds, and the writings that their ancestors had produced by toil and application, to perish through insufferable neglect. Although they had nothing of their own to hand down to those who were to come after, they robbed posterity of its ancestral heritage." - Francesco Petrarch

Petrarch is primarily remembered as a lyric poet, the author of 366 poems collected in his Canzoniere or song book. It would be difficult to imagine the fate of the sonnet, even for Shakespeare, without the masterful examples of Petrarch’s poems about the love of his life, Laura. Petrarch’s other major collection of poetry, theTrionfi, takes the poet from his intense worldly love for Laura, joined by loves and lovers throughout the ages, to the contemplation of the successive victories of Love, Chastity, Death, Fame, Time, and Eternity. The poet becomes the moralist and philosopher who searches for meaning, as life passes from one stage to the next. Beyond earthly bonds, Petrarch envisions eternal bliss, but not one without his great love. In the final verse, he hopes to see Laura again in a form even more beautiful than on earth: “Now how will it be to see her again in heaven.”

Petrarch was a prolific writer. From his pen flowed not only poetry in Italian and Latin, but also hundreds of letters as well as essays and histories on such topics as good and ill fortune, the religious and solitary life, famous people, self-assessment, the nature of ignorance. In his writings we find the stuff of life expressed in all its human variety and vitality. 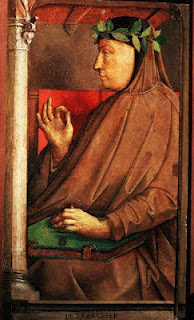 Not only was Petrarch a poet, philosopher, and moralist, he was above all a scholar of exceptional intellectual curiosity and competence. Beginning as a child, he dedicated his life passionately to the pursuit of knowledge, especially from the classical world of ancient Greece and Rome. As an adult he brought the past to life, collecting the words of ancient thinkers and writers and passing them on to later generations. He collected books, discovered long-lost writings, and edited texts, especially those of his favorite authors Cicero, Livy, and Virgil. By the end of his life, he owned one of the largest private libraries in the world, which he gave to the city of Venice in exchange for a house there.

Petrarch’s library was intended to become the first public library in the western world. Instead his books were dispersed, and many now reside in libraries and collections throughout the world, including the United States. Together with manuscripts and books by and about Petrarch, they form a formidable collection of Petrarch’s powerful words.

As Ernest Hatch Wilkins writes in his Life of Petrarch, “Petrarch was the most remarkable man of his time; and he is one of the most remarkable men of all time.” Petrarch’s legacy encourages us to study the human condition of the past, enabling us in turn to engage in the present more fully and to prepare more wisely for the future. It is this heritage that we celebrate 700 years later.

Source:  Yale Library Archive
Posted by James at 11:17 AM

No Petrarchian sonnet,nothing by Dante Alighieri,or by Thomas Wyatt, Shakespeare, John Milton, Thomas Gray,William Wordsworth, Elizabeth Barrett Browning or Edna St. Vincent Millay, as they all started with the same template for their own sonnets.

And great they all are. Thanks.