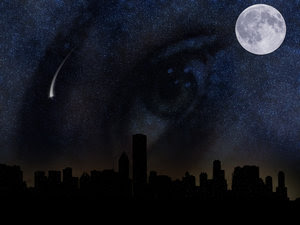 "We Look up at the Stars"
I posted the following poem more than a year ago as an "Hommage à Auden"; however, it seems fitting to refer to it once again as a poetic response to the lecture I attended yesterday by Herman Sinaiko on Plato's Republic. This is a response to the power poetic and real of knowledge and the possibility of growth in wisdom.
A More Human Universe
We look up at the stars above and realize
How little we know -- what a masquerade
Of consciousness we live -- our guise
For a reality that stands alone.
How great is the gulf between the stars
And those below, who dream of cares
So small? Our sky includes both Mars
And other celestial beauties for our wonder.
We look to the sky above and are alone,
Vulnerable to the reality we live below.
Do we hope to share in the infinite one,
With the stars as companions to our being?
The feeling of the stars, in its icy gravity,
Displays nothing that points toward
A more human universe.
Can we bridge the gulf with knowledge?
No, not knowledge, but wisdom acquired
By facing the certainty of each moment lived.
The reality of roles and missions discovered
And fulfilled is moving us closer to the stars.
- James Henderson
(August, 1992 (2003))
Posted by James at 6:01 PM