Allegory of the Power of Eloquence 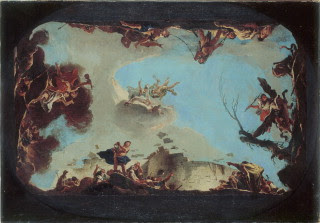 Giovanni Battista Tiepolo was the greatest of the Venetian painters of the Rococo period and, indeed, all of the 18th century. His characteristic style displays numerous active figures in vivid pastel colors ranged across vast, airy spaces. Critic Robert Hughes described Tiepolo's work as "full of soaring and twisting space, transparency and delicious shot-silk color -- a place dedicated to the imagination and filled with idealized personages from history, myth and fable." Yet arts historian Paul Holberton observed that Tiepolo "could temper the graceful, operatic posturing typical of the Rococo school with an Olympian grandeur."

Tiepolo began his career as a student of Gregorio Lazzarini, but his elegant and sumptuous style was perhaps most heavily influenced by his study of the work of his predecessor more than 100 years earlier, Paolo Caliari [Veronese].

Tiepolo executed paintings and frescos throughout Venice and the Veneto, with excursions to Bergamo (Colleoni Chapel) and Milan (ceiling, Palazzzo Clerici). Among prominent installations of his work in Venice are the ceiling panels of the Scuola Grande dei Carmine (early 1740s). His earliest surviving frescos were created, 1734, for the then newly-rebuilt villa of Count Loschi at Brion de Monteviale near Vicenza. One of my favorites is the painting Allegory of the Power of Eloquence done as a model for the ceiling of the salone in the Palazzo Sandi, Venice (c. 1725) (above).

Tiepolo is buried in Venice in his parish church of Madonna dell'Orto, where he is represented by the giant canvas The Worship of the Golden Calf and by The Last Judgment. Tiepolo's reputation has seen ups and downs over the last century but the "distanced, self-aware theatrics of his style" are seen as precociously modern -- but with a virtuosity unique to Tiepolo himself.


Giambattista Tiepolo: His Life and Art by Michael Levey. Yale University Press (1987)
Posted by James at 5:28 AM

This is my new, one stop course in the humanities. Thank you!

Well, thanks but watch out for my personal biases. There is a huge gap between the "humanities" and my meager collection of preferences. You might want to peruse From Dawn to Decadence and other works of Jacques Barzun. Now that would be an education.