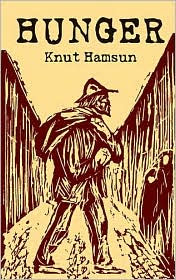 Hunger by Knut Hamsun is a startling narrative told by a young journalist who is literally starving throughout the novel. Hamsun's technique, achieved in this first novel of his published in 1888, is to present a first person narrative that demonstrates a man subject to delusions and psychological stress that almost reaches the breaking point. This is not unusual for a contemporary author, but in the late nineteenth century it was very unusual.

Written after Hamsun's return from an ill-fated tour of America, Hunger is loosely based on the author's own impoverished life before his breakthrough in 1890. Set in fin-de-siecle Christiana, the novel recounts the adventures of a starving young man whose sense of reality is giving way to a delusional existence on the darker side of a modern metropolis. While he vainly tries to maintain an outer shell of respectability, his mental and physical decay are recounted in detail. His ordeal, enhanced by his inability or unwillingness to pursue a professional career, which he deems unfit for someone of his abilities, is pictured in a series of encounters which Hamsun himself described as 'a series of analyses.' In many ways, the protagonist of the novel displays traits reminiscent of the underground man and Raskolnikov, whose creator, Fyodor Dostoevsky, was one of Hamsun's main influences. Hunger encompasses two of Hamsun's literary and ideological leitmotifs: His insistence that the intricacies of the human mind ought to be the main object of modern literature. His literary program, to describe 'the whisper of the blood and the pleading of the bone marrow', is thoroughly manifest in Hunger; and, his depreciation of modern, urban civilization. In the famous opening lines of the novel, he ambiguously describes Christiana as "this strange city no one escapes from until it has left its mark on him . . .." (p.3)

In Hamsun's story you have the unnamed narrator imagining actions of others, impersonating other people and living on the brink of an existence that seems surreal. In effective clear prose this rises to the level of a nightmare in print. The beauty and power of this book makes it a great read and one that I will not forget.