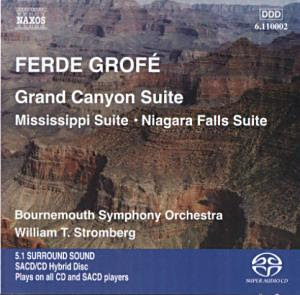 Ferde Grofe
Today is the anniversary of the birth of Ferde Grofe in 1892. I have fond memories of listening to his Grand Canyon Suite, as it was one of the first recordings with which I began my collection of classical music. And it is classical in the grand romantic idiom with sweeping melodies that painted the vistas of the Canyon, sunrise, the pack animals and storms. It was a wonderful piece to listen to and I still sit back and enjoy it when it is played, as it was on WFMT this morning.

Born Ferdinand Rudolph von Grofé, in New York City, Grofe came by his extensive musical interests naturally. Of French Huguenot extraction, his family had four generations of classical musicians.Grofé left home at age 14 and variously worked as a milkman, truck driver, usher, newsboy, elevator operator, helper in a book bindery, iron factory worker, and as a piano player in a bar for two dollars a night and as an accompanist. He continued studying piano and violin. When he was 15 he was performing with dance bands. He also played the alto horn in brass bands. He was 17 when he wrote his first commissioned work.

Beginning about 1920, he played the jazz piano with the Paul Whiteman orchestra. He served as Whiteman's chief arranger from 1920-1932. He made hundreds of arrangements of popular songs, Broadway show music, and tunes of all types for Whiteman. In addition to being an arranger, Grofé was also a serious composer in his own right. While still with Whiteman, in 1925, he wrote his Mississippi Suite, which Whiteman recorded in shortened format in 1927. He wrote a number of other pieces, including a theme for the New York World's Fair of 1939 and suites for Niagara Falls and the Hudson River. Possibly as a result of his World's Fair theme, 13 October 1940 was designated Ferde Grofé Day at the American pavilion of the World's Fair. Grofé conducted his Niagara Falls Suite as part of the ceremony marking the opening of the first stage of the Niagara Falls Power Generation project.

Today, Grofé remains most famous for his Grand Canyon Suite (1931) a work regarded highly enough to be recorded for RCA Victor with mastery by Arturo Toscanini and the NBC Symphony (in Carnegie Hall in 1945, with the composer present). The earlier Mississippi Suite is also occasionally performed and recorded. Grofé conducted the Grand Canyon Suite and his piano concerto (with pianist Jesús Maria Sanromá) for Everest Records in 1960.
Posted by James at 1:42 PM

Glad you enjoyed the music!