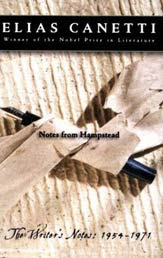 Notes from Hampstead
by Elias Canetti

"When you write down your life, every page should contain something no one has ever heard about."   - Elias Canetti

Born in the port of Rustschuk on the lower Danube, Elias Canetti (1905-1994) went to England with his parents in 1911; after his father's sudden and premature death in 1913 the family moved to Vienna. Between the years 1916 and 1924, he attended schools in Zürich and Frankfurt-am-Main. He then studied science in Vienna, the result being a doctorate in chemistry in 1929. Ever since then he has devoted himself exclusively to writing. In 1938 he went to France; sometime later, he moved to London.

When surveyed, Elias Canetti's literary work may seem split up, comprising as it does of so many genres. His oeuvre consists of a novel, three plays, several volumes of notes and aphorisms, a profound examination of the origin, structures and effect of the mass movement, a travel book, portraits of authors, character studies, and memoirs; but these writings, pursued in such different directions, are held together by a most original and vigorously profiled personality.

The exiled and cosmopolitan author, Canetti has one native land, and that is the German language. He has never abandoned it, and he has often avowed his love of the highest manifestations of the classical German culture.

Notes from Hampstead is an amalgam of notes, thoughts, and aphorisms. Elias Canetti shares his thoughts on topics ranging from ancient mythology to the violent nature of the twentieth century. Most interesting to me are his musings on authors whom he loves, including Cervantes, Stendahl, Gogol, Musil and Kafka. His readings inspire thoughtful observations as this commentary on Herzen's life:

"Invention's quality of surprise, its advantage, can also be arbitrary. Later, in the context of our own lives, this arbitrariness is no longer possible. We must stay with that which our best understanding tells is is the truth. This truth is what matters, and it is on its account that we set down our life in writing." (p. 181)

His comments are sometimes inscrutable, but often delectable and definitely worth considering, especially if you have read and wondered over his novel, Auto da Fe. It is in this light that I find his thoughts about other writers fascinating. He speaks with humility and sincerity in moments like this:

"Kafka: I grovel in the dust before him; Proust: my fulfillment; Musil: my intellectual exercise." (p. 156)

As I am currently exercising my intellect with the writing of Robert Musil I can fully appreciate at least some of the spirit in which Elias Canetti shared his notes on writing and reading.