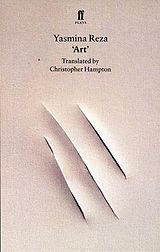 Last night I attended a performance of the play Art by Yasmina Reza produced by the Steppenwolf Theatre Company. It was an invigorating evening of thoughtful dialogue on art, and humor abounded, albeit in sometimes sarcastic tones; but more importantly, the play demonstrated the nature of friendship and how differences among friends can strain their relationship.


The comedy, which raises questions about art and friendship, concerns three long-time friends, Serge, Marc, and Yvan; played respectively by John Procaccino, Francis Guinan and K. Todd Freeman*. Serge, indulging his penchant for modern art, buys a large, expensive, completely white painting. From the opening scene of the play Marc is horrified, and their relationship suffers considerable strain as a result of their differing opinions about what constitutes "art". Yvan, caught in the middle of the conflict, tries to please and mollify both of them (at least for a while until the strain of doing so becomes too great).

The play is not divided into acts and scenes in the traditional manner, but it does nevertheless fall into sections. Some of these are dialogues between two characters, several are monologues where one of the characters addresses the audience directly, and one is a conversation among all three. At the beginning and end of the play, and for most of the scenes set in Serge's flat, the large white painting is on prominent display.

I found the play to be stimulating and the overall contrast between the apparent simplicity of the white painting, magnified by the monotone shades of the set, best described as different shades of white, and the complexity of the relationships between the men were important themes. The vivid and biting dialogue was always laced with vigorous humor that leavened the more serious aesthetic and philosophical questions that were being discussed. The extremes displayed by the three characters combined to create a tension that was not eased until the coda of the play, and then it was questionable whether the actual ending was satisfactory or believable. But that is for the audience to determine for themselves. Overall it was a great evening of serious comedy.

I know nothing about the representation of this play by the Steppenwolf Theatre Company. But I am quite acquainted with the original representation, in french, with Pierre Arditi, Marc Vaneck and Fabrice Luchini. In regard of this version, you forgot one thing: it is a very vivid, vigorous and humorous play.

I do not know if you are able to understand french (I think you can because you put Inquiries, my blog, in your list, and this blog is almost half/half english and french), but if you can, please consider to watch a record of the representation by Luchini, Vaneck and Arditi. It is fabulous. (Note that the author, Y. Reza, has forbidden the distribution of this record, so it is quite difficult to find one now.)

Thanks for your comments on the original french version. You are right to note that I did not emphasize the humorous side to the play. I think that is more due to my point of view than the play which was, as you put it, "vivid, vigorous and humorous". I will amend my remarks to make that clear. I especially enjoyed the humorous references to Seneca, among others.
Following the performance there was a discussion between the dramaturg and the audience. She suggested that the American reaction to the English translation of the play may have been different than that of the original French audiences. My knowledge of the French language is weak, so I may not be able to appreciate the original version, but I will consider watching it.

I did not make my comment in order to make you change your post! But it is very kind of you to take into account my remark.

The passage with Seneca are really funny! ("Lis Sénèque!") I watch the play only once, and it was 4 or 5 years ago, but I still remember the passages about Yvan and his (hilarious) worries about his marriage.

Can you be more precise about the differences between French and American audiences?

Your comment reminded me that my commentary had ignored the brilliance of the comedy, the audience (at least some) were laughing throughout the play. Yes, Yvan had one monologue about his marriage that brought the house down - it was hilarious. Regarding the differences between the French and American reactions, I cannot comment further than they were noted by the Dramaturg.

Are you suggesting that what Y. Reza said about the differences between American and French audiences is similar to the difference between what you saw in the play (mostly, philosophical and psychological aspects of friendship), and what I thought to be important (humour)?

No, I guess I did not make that clear. Without going into details, I believe the difference, in her opinion, was more between an emphasis on the art versus an emphasis on the friendship rather than on my interpretation of the play. Beyond that I cannot say more about what else she may have meant. I hope that helps clarify my comments a bit. I probably should not have tried to interject her opinion as I am not in a position to elaborate on it or clarify further.