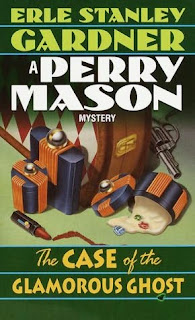 “You might be interested in his economic philosophy, Mr. Mason. He believed men attached too much importance to money as such. He believed a dollar represented a token of work performed, that men were given these tokens to hold until they needed the product of work performed by some other man, that anyone who tried to get a token without giving his best work in return was an economic counterfeiter. He felt that most of our depression troubles had been caused by a universal desire to get as many tokens as possible in return for as little work as possibly - that too many men were trying to get lost of tokens without doing any work. He said men should cease to think in terms of tokens and think, instead, only in terms of work performed as conscientiously as possible.” ― Erle Stanley Gardner, The Case of the Perjured Parrot

Erle Stanley Gardner died on this day in 1970, after eighty-eight Perry Mason books (and many others) in forty years. I first encountered him through the television show in the 1950s. It was a favorite of our whole family, but as a reader I soon started reading my mother's copies of the crime stories by Gardner starring Perry and his cohorts Della Street and Paul Drake. I must have read dozens by the time I went to college.
Many titles also showed a weakness for alliteration: The Case of the … Careless Cupid, Worried Waitress, Beautiful Beggar, Daring Divorcee, Stepdaughter’s Secret, Amorous Aunt, Blond Bonanza, Spurious Spinster, Duplicate Daughter, Shapely Shadow, Terrified Typist, Singing Skirt, Demure Defendant, Restless Redhead, Negligent Nymph, Cautious Coquette, Vagabond Virgin, Borrowed Brunette. While they were somewhat formulaic, some were better than others and they all were entertaining. A guilty pleasure from my early years of reading.
Posted by James at 8:59 PM