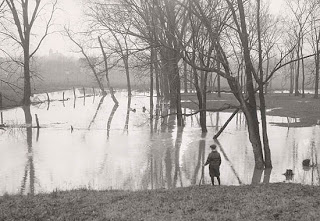 
James Whitcomb Riley is not remembered as one of the great poets, when he is remembered at all. His poetry is not included in the Oxford Book of American Verse, nor is it in The Norton Anthology of Poetry or Harold Bloom's recent compilation of the greatest poems in English.
I had to search through several collections before I found four of his poems in a collection titled, America's Favorite Poems. Perhaps that is indicative of his standing as a poet. He is not considered great or even almost great by the critics and literary scholars, he is just loved by those Americans who enjoy beautiful poetry.

James Whitcomb Riley was a poet of the latter half of the nineteenth century, born on October 7, 1849 in Greenfield, Indiana and died in 1916 having not lived to see the end of The Great War. His childhood and home were great influences on him. His most famous poems were about people and situations from his real life. His poems, "The Raggedy Man," and "Little Orphant Annie," are about a hired hand and an orphan girl who helped on the family farm. The farmhand and Annie told the local children stories that Riley immortalized in his work. His poems, though of epic proportion in many senses, told of everyday things.

Riley, like many poets, published his first works in newspapers. At first he wrote under a pen name, "Benjamin F. Johnson of Boone." He often wrote in his own dialect, appealing to the majority of people with his common style and words. Garland held Riley alike to Mark Twain, for his ability to use natural dialect in his writing and speech, though also possessing the ability to speak in a more precise and standard English. After the success of his written work, Riley took to the road again, and traveled around the country to recite his poems in every city. This earned him great popularity, and people were fascinated by his dialect and use of the language, as well as his cheerful sense of humor. For he was a happy poet, cheerful in his lyrical praise of Midwestern life and America. He could be literary as well, as we see in this poem about Robert Burns:


As We Read Burns

Who is speaking? Who has spoken?
Whose voice ceasing thus has broken
The sweet pathos of our dreams?
Sweetest bard of sweetest themes,
Pouring in each poet-heart
Some rare essence of your art
Till it seems your singing lip
Kisses every pencil tip!
Far across the unknown lands --
Reach of heavenly isle and sea --
How we long to touch the hands
You outhold so lovingly!

In 1883, a collection of his poems was published, entitled "The Old Swimmin' Hole and 'Leven More Poems," followed by "Rhymes of Childhood" in 1890, "Poems Here at Home" in 1893, and "Knee Deep in June," in 1912. His most famous poems are "Little Orphant Annie," "The Raggedy Man," "When the Frost Is On the Punkin," and "The Runaway Boy." In Riley's later life, these volumes attracted both national and international readers, and he became the wealthiest writer of the time. He was honorably labeled as America's "Children's Poet," and as "The Hoosier Poet," in his home state. James Whitcomb Riley is a warm and gentle poet whose verse lightens the reader's day and night, any season of the reading year.