Scenes from a Life

Time and Place
by Alan Sheridan

“The Summer Garden, perhaps the most beautiful garden in Petersburg, had the particular advantage of being almost next to the Embassy. Originally laid out by Leblond, in the manner of Versailles, its most remarkable feature was a series of fountains, with statuary depicting scenes from Aesop's Fables.”  ― Alan Sheridan, Time and Place


This is a novel qua biography and an artistic charmer in the gayest sense of the word. The protagonist, young Mark Sheridan, is precocious both intellectually and sexually with an ability to charm most of the men he meets in this book that seemed longer than it in fact was.


The story is narrated in the first person as though told by young Mark himself; with a diary-like form relating his experiences both in the acting world and earlier, as the son of a diplomat based in China and Russia in the late nineteenth century. Much of the book is set in Peking, St Petersburg, Paris, and London with travelogue-style descriptions of the cities, as well as lengthy but slightly less orthodox descriptions of Mark’s many encounters with men. These encounters were usually brief and when he did develop a relationship they seemed somewhat flat and not as well-developed as the settings in which they occurred. His essays on the usefulness of public conveniences as pick-up joints at a time when homosexuality was still expressly forbidden across most of Europe are quite frank!


The sense of place, then, was beautifully suggested. I felt I knew the avenues of Paris, the gardens, canals, and underground toilets of St Petersburg, and the compounds and back streets of Peking.  It was if I was there with Mark as he explored, rutted, and trod the boards.


One difficulty I had with the book was with Sheridan’s handling of the time-scales involved. It opens in the early twentieth century with Mark as a fully fledged actor but soon flashes back to China and Russia of the 1890s when he was still a child, and from then on it progresses or regresses from the 1920s to the 1900s to the 1890s in a seemingly endless series of flashbacks. Each section was complete in itself and each one nicely presented the time in which it was set, but I soon felt that the continuity of narrative was confused at best.


Overall, however, I found the book rather enjoyable; written well enough to encourage the journey through the flashbacks. The beautiful locations also helped, but I would hesitate to recommend this book to an impatient reader.

Paradigms Lost:
Reflections on Literacy and Its Decline
by John Simon

"Language is a sacred trust: we should nurture it, polish it, encourage it to grow new branches; instead, we kick it around, blunt it, and smash it at the peril of our very souls." ("The Sacred Trust", p. 69)

This is a collection of essays on language by one of the greatest critics of the twentieth century. Few writers can compare with the knowledge of language and the way with words demonstrated in John Simon's trenchant essays. This compendium is a delight for all readers who enjoy virtuosity in the use of language to defend the best writers who pursue the best words.

These essays span such topics as writers, linguists, the performing arts, the media, and more. His comments are biting and to the point; here is an example:
"In the beginning was the word, But by the time the second word was added to it, there was trouble. For with it came syntax, the thing that tripped up so many people. And they're tripping up more than ever today."("Authors Without Fear or Shame", p. 111)
It is an eclectic collection of elegant prose that will leave you wanting to read more criticism from the pen of John Simon.

A Little Person in The Troubles

Milkman is a unique historical novel told from the personal prospective of an unnamed young female narrator. Walking while reading, a girl - Middle sister - is pursued by the Milkman. This original sometimes mesmerizing narrative made me successively fascinated and bored with the dizzying rapidity of thoughts that connected - somehow, sometimes and ultimately.

The history is the setting of the novel during the time of the "Troubles". This refers to the conflict in Northern Ireland during the late 20th century. It was also known internationally as the Northern Ireland conflict and it is sometimes described as an "irregular war" or "low-level war". The conflict began in the late 1960s and is usually deemed to have ended with the Good Friday Agreement of 1998. Among other awards it won the Booker Prize in 2018.

What makes Milkman unique, among other things, is that the narrative portrays the "Troubles" without using such terms as ‘the Troubles’, ‘Britain’ and ‘Ireland’, ‘Protestant’ and ‘Catholic’, ‘RUC’ and ‘British army’ and ‘IRA’. On the other hand, the narrator’s personal, first-principles language, with its phrases coming at you so frequently with inverted commas and sudden changes of register, is also used to describe the inner world of a young woman ...
“I used to puzzle over the extent of this anger, of all of ma’s blaming and haranguing and complaining. It was only much later that I came to realize that this was a case of her not forgiving him for many things – maybe for all things – and not just for not cheering up.”

It’s a brilliant rhetorical balancing act, and the narrator can sometimes be very funny. The tonal changes are subtle and the plot has some absurd moments, yet, while it is easy to overlook on a first reading, at least until the final stretch, there is a density and tightness of plotting behind the narrator’s apparently rambling performance. What’s more, the comic unfolding of the plot runs counter to the narrator’s tight sense of what can and can’t be said and done in her neighborhood, and, after a chilling final encounter with the milkman, the ending is a surprise and perhaps a relief.


The author uses imaginative language and her limited use of proper names creates a sort of distancing effect. The style of the novel is demanding, but as a reader your perseverance is rewarded in the end. I would compare the difficulty I encountered with its style to a similar difficulty that I experienced reading Cloud Atlas by David Mitchell (short-listed for the Booker Prize in 2004). While very different in many ways both of these difficult reads are worth the effort required.

Books on the Bus
an update 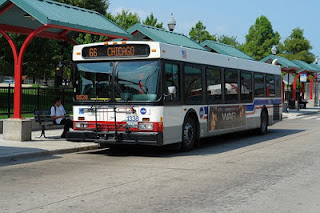 I always have a book with me including when I ride the bus. When I am out and about I prefer to leave the heavyweight tomes at home so my current reading that includes: The Symposium, a dialogue by Plato;  The Brothers Karamazov;  and the Essais of Montaigne, all of which are left on a table next to my comfortable reading chair.

On a recent morning I was reading the short novel The Country of Pointed Firs by Sarah Orne Jewett as I rode the bus headed downtown.  Similarly, some years ago,  when I rode downtown and back to meet some former coworkers for lunch I took along Gene Smith's slight but fascinating biography of Woodrow Wilson's last years, When The Cheering Stopped: The Last Years of Woodrow Wilson.  Now what do these two disparate books have in common? They are both lightweight and easy to carry and it also takes a little less concentration to read them than that required for Dostoevsky or Plato.

While I enjoy reading as I travel I equally enjoy noticing what my fellow bus riders are reading. There are always a few readers on board any bus with more than a handful of passengers. Call me a biblio-voyeur if you will, but I cannot deny my interest. Usually the books are not worth the glance, for the buses are filled with people reading Twilight or its clones, the latest romance novel or some Ludlumesque thriller-chiller (all of which I personally find unreadable - but that's just one reader's perspective).

Not to long ago just after I had finished reading the novel Less by Andrew Sean Greer I was riding the bus headed downtown and the fellow who sat down next to me pulled out the same book - needless to say a brief genial conversation ensued.  This reminded me of previous occasions when I encountered people with various reading material including  Knowles' A Separate Peace, and Complications: A Surgeon's Notes on an Imperfect Science by Atul Gawande. Now those are both books worthy of consideration, in fact I've read A Separate Peace more than once. They provide evidence that there is a bit of gold among the dross of the many books being read on the bus.

It reminds me of yet another time several years ago that I struck up a conversation with someone who was reading No Ordinary Time: Franklin and Eleanor Roosevelt: The Home Front in World War II by Doris Kearns Goodwin. I had recently read it myself and could not help sharing the joy of the experience by discussing the book with a fellow reader - no stranger, for we were connected by our shared reading. While that does not happen often since I usually have my nose buried in a book, there is nothing like taking books with you and reading them on buses -  enjoying them while traveling to and fro.
Posted by James at 9:53 AM 6 comments: