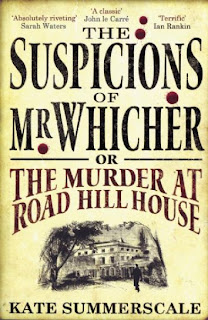 In the midst of reading Dickens and attending a class at the Newberry Library a classmate recommended a "true crime" history book to our class. I have read that book, The Suspicions of Mr. Whicher by Kate Summerscale and can report that it is an excellent read for those interested in Victorian history, true crime stories or Dickens, at least as he relates to the development of the detective profession.

The Suspicions of Mr. Whicher presents both the history of an horrific murder in an English Country House in 1860 and the life of Jonathan Whicher, one of the first detectives of Scotland Yard. The details of the crime presage our own era with its JonBenet Ramsey saga. In this instance it centers on the Kent family and their household. Ms. Summerscale does an effective job in presenting the details of the crime, but also focuses on the background of Mr. Whicher in a way that adds to the reader's interest. An additional advantage for this reader were the numerous references to Dickens and his friend Wilkie Collins who popularized the detective novel in Victorian England. The Dickens' character I most closely associate with detective fiction is Inspector Bucket who was introduced in Bleak House in 1853. Dickens interest in true crime continued from his early days as a journalist through his years as England's most popular novelist. This book falls short of the best of Dickens or Collins, but is a great introduction to one corner of the Victorian era, even if it is a grisly one.