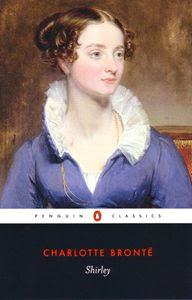 Shirley is Charlotte Bronte's only historical novel and in that her most topical one. Written at a time of social unrest, it is set during the period of the Napoleonic Wars, when economic hardship led to riots in the woollen district of Yorkshire. A mill-owner, Robert Moore, is determined to introduce new machinery despite fierce opposition from his workers; he ignores their suffering, and puts his own life at risk. Robert sees marriage to the wealthy Shirley Keeldar as the solution to his difficulties, but he loves his cousin Caroline.
She suffers misery and frustration, and Shirley has her own ideas about the man she will choose to marry. The friendship between the two women, and the contrast between their situations, is at the heart of this compelling novel, which is suffused with Bronte's deep yearning for an earlier time spent as a governess; her longing for a better past.

Shirley is not Charlotte Bronte's best book in the sense that it is less compulsively readable than Jane Eyre (I should note that I have read enjoyed Jane Eyre several times over the years and it is one of my favorite novels). Perhaps the lack of readability is because it is constructed in large part to make certain social statements, in the mode of Dickens, rather than written with a more singular focus on the romantic aspects of the plot (Shirley suffers when compared to most of Dickens' novels). Bronte does, however, express herself with great beauty in certain passages and demonstrates her character: her conviction that women might be as well qualified as men to practice a profession (which sets her apart from most of her own contemporaries); her contempt for the market of marriage; and her experience.
The book is worth reading and for some readers may resonate more positively than it did for me.