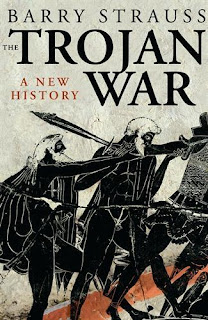 "Both in his exaggerations and his honesty Homer is truer to the Bronze Age than is generally recognized." - Barry Strauss, The Trojan War, p185.

Ever since Heinrich Schliemann discovered the "gold of Troy" archaeologists and historians have been expanding our knowledge of this era at the beginning of Western history. Barry Strauss' account of this era of Bronze Age history is delineated in The Trojan War: A New History. He writes a narrative drawing on recent archaeological data that he uses to explain the events at Troy more than 3,000 years ago based on current evidence.
This book puts the events of the age into perspective with insight on the relations between Troy and the Hittite Empire of Anatolia and its impact on the battles between the Achaean's, as the Greeks were known then, and the Trojans. He comments on the story as found in Homer's Iliad, pointing out those aspects of the epic poem that have some basis in that can be connected with the archaeological data. I found the book to be a useful adjunct to my current rereading of Homer's Iliad and would recommend it to anyone interested in ancient history.