Voyage of the Philosophy Steamer 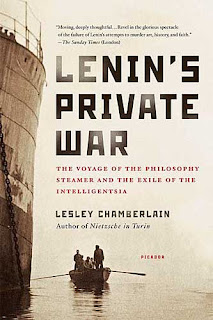 The tremendous outflow of intellectuals that form such a prominent part of the general exodus from Soviet Russia in the first years of the Bolshevist Revolution seems today like the wanderings of some mythical tribe whose bird-signs and moon-signs I now retrieve from the desert dust. We remained unknown to American intellectuals (who bewitched by Communist propaganda, saw us merely as villainous generals, oil magnates and gaunt ladies with lorgnettes). That world is now gone.


In September 1922 a steamer with Russian citizens aboard left Petrograd for the West with a group of the "intelligentsia" of Russia, literary critics philosophers and others . This ship and others would eventually carry more than two hundred into exile in what has been chronicled by Lesley Chamberlain in her book, Lenin's Private War. Subtitled 'The Voyage of the Philosophy Steamer and the Exile of the Intelligentsia", the book, a sort of intellectual history and cultural biography, tells the story of this group of Russian thinkers, most of whom would never return to their homeland. This episode can be seen as the beginning of the closing of Russia to the West and one of the critical steps in the Bolsheviks exertion of complete totalitarian control over the arts and philosophy in the Soviet Union. Among the exiles were well-known thinkers including philosophers Nikolai Berdyaev and Nikolai Lossky; historians Myakotin and Kizevetter; and, many other writers, economists, journalists and social scientists. Their crime simply was they had overstayed their welcome. They did not fit into the plans of Lenin. Fortunately, while they were arrested, their end was one of exile rather than immediate execution.

Lesley Chamberlain vividly delineates the character of key members of this group, highlighting the singular importance of Berdyaev and his Christian idealism that was the antithesis of Lenin's Marxist materialism. The book is fleshed out with details from letters, memoirs and other documents that provide a solid foundation for the story she tells. We learn of their arrest and interrogation and the background leading to their ultimate exile. The irony of this exile is explored in the second half of the book which discusses the difficult world they faced in a Europe that came to be dominated by Hitler in the 1930s. Some of these thinkers faced even worse fates in that world than they had in the Russia from which they had been exiled. Ultimately many fled to the United States or merely went into hiding for the duration of the war. Their exile is magnificently told in this book. Chamberlain has provided us with a fascinating story of separation and hope.