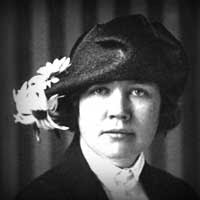 
I never read the "Little House" books when I was growing up and my only acquaintance with them and their author, Laura Ingalls Wilder, was through the extremely popular television series based on the stories.
Presumably the popularity of the books, which predated the television hype, was not due to the same saccharin qualities that permeated the faux-rustic TV show.

I did, however, read The Discovery of Freedom, a unique and iconic personal view of the history of the idea of freedom, penned by her daughter Rose Wilder Lane. It is a foundational document for many latter-day libertarians and a great read for those who love the history of ideas. For those who are interested in these two very long-lived and lively women The New Yorker has a fascinating article about their lives by Judith Thurman in the current issue. There are a host of interesting details including a discussion over Rose's controversial "editing" of the Little House books, apparently a collaborative effort.