A Play About Friends - and Best Friends 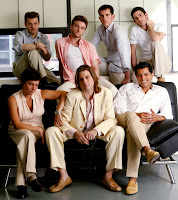 The Homosexuals
by Philip Dawkins

Another Saturday evening and it is time to take in another play.  This week I attended a performance of The Homosexuals presented by About Face Theatre at the Victory Gardens Theater on North Lincoln Avenue.  The sold-out audience that I joined saw a play about a young gay man from Iowa who arrives in Chicago at the beginning of the first decade of the twenty-first century with literally nothing, no place to stay, no job, no friends and, importantly, no support from his family back in Iowa.  But he meets another young man in a candy shop and is invited to a party at which he meets a group of people who will become his friends - some best friends - for the the decade.  The playwright presents the story through vignettes in the life of the boy, Evan (played by Patrick Andrews), told in reverse chronological order.  It is a tribute to Patrick's acting ability that he succeeds in convincingly making the gradual transition from the first scene set in 2010 to the final one which depicts his arrival at the party in 2000 as a nervous young man from Iowa.  Nervous though he surely is, but he knows himself well enough to have made it to Chicago even as he still has difficulty discussing this knowledge with others.  The rest of the ensemble under the direction of Bonnie Metzgar was excellent as they also captured the changing momentum as scene by scene Evan's relationship with his friends changed and as his experience with some of them as lovers changed as well.  I was also impressed with the seamless scene changes that had the look of quiet ballets of movement as the scenes were set up.

Prior to attending the play I had heard it compared favorably with Mart Crowley's The Boys in the Band, an  ensemble about gay men from an earlier and very different era (an era I remember well as I saw the film version as a young gay man in college).  But after seeing the play performed I found myself comparing it to Terrence McNally's 1994 play, Love! Valour! Compassion!  The relationships depicted seemed much more like the latter play although this too is from a different era albeit one closer to our own.  Dawkins even incorporates a reference to it as part of Evan's somewhat nervous comments about his background at the party where he encounters or rather is inundated by the gayness and gaiety of his new friends.  This play successfully incorporates references to contemporary gay life and in doing so provides a marker for gay culture of the Millennials (born after 1980) while entertaining those of us from earlier generations with witty dialogue and plenty of laughter.

this sounds like an entertaining play, yet full of meaning, with its cultural reference points acting as a history of gay culture at that point in time, without being as pompous sounding as my comment :- )

The dialogue of the play was almost consistently on the mark as far as contemporary gay men are concerned. That said it was also a very Chicago-focused play so I'm not sure how it might play elsewhere. Key to the success was the performance of the central character, Evan, as almost every scene depended on his ability to make the journey of his character believable. The remainder of the cast were portrayed as recognizable gay "types" without becoming caricatures.