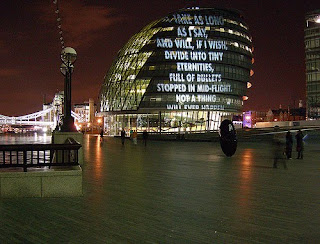 London City Poem
The artist American artist Jenny Holzer was commissioned to present a series of poems to mark Samuel Beckett's centenary, as a part of of the Beckett Centenary Festival at the Barbican. Each night for 8 days she projected a number of poems against London landmarks, such as City Hall, Somerset House on the Strand and the Barbican.
Writings from Beckett and a selection of works by celebrated poets, were cast as light projections onto well-known London landmarks, allowing light and text to flow over the cityscape, creating an extraordinary visual experience.
This series of light projections is part of a programme by Jenny Holzer called ‘For the City’, which took other cities too, such as New York (to be published on Inspiring Cities later).
In London, she projected poems by several poets. The Poem Projected in the above picture was written by the 1996 Nobel Prize winning Polish poet Wislawa Szymborska. Printed in bold is the text in the picture.
Source: InspiringCities.org
Posted by James at 3:00 PM