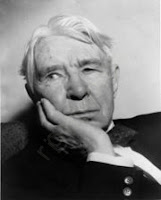 Carl Sandburg
Here is the difference between Dante, Milton, and me. They wrote about hell and never saw the place. I wrote about Chicago after looking the town over for years and years.
- Carl Sandburg
Carl Sandburg died on this day in 1967 in North Carolina, where he had spent his last years. At his request, his ashes were buried under the "Rembrance Rock" memorial that had been established the previous year in the backyard of his first home in Galesburg, Illinois. The concept of the memorial and its epitaph — "For it could be a place to come and remember..." — come from Sandburg's only novel, in which one of the characters, as a tribute to the nation's history, buries soil gathered from various historical sites in America beneath a large rock. I still have the multiple-volume set of Sandburg's Biography of Abraham Lincoln. One of the memories from my mother that reminds me of growing up with books in the house. Both these memories and Sandburg's poetry will continue to remind me of his greatness.
Posted by James at 5:50 PM