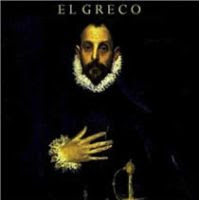 El Greco
Born in Candia [now Herakleion], Crete, c. 1541; d Toledo, 7 April 1614, El Greco was a Greek painter, designer and engraver, active in Italy and Spain. He is considered the first great master of Spanish painting.
Documentation on his early life is limited, but it is known that he was in Venice c. 1566 – 70 and may have studied in Titian's workshop. One of the most original and interesting painters of 16th-century Europe, he transformed the Byzantine style of his early paintings into another, wholly Western manner. He was active in his native Crete, in Venice and Rome, and, during the second half of his life, in Toledo. He was renowned in his lifetime for his originality and extravagance and provides one of the most curious examples of the oscillations of taste in the evaluation of a painter, and of the changes of interpretation to which an artist's work can be submitted. El Greco's Mannerist method of composition is nowhere more clearly expressed than in his masterpiece, The Burial of the Count de Orgaz (1586 – 88), where all of the action takes place in the frontal plane. From 1590 until his death his output was prodigious. His major commissions included the complete altar composition for the Hospital de la Caridad at Illescas (1603 – 05), for which he also worked as architect and sculptor. He excelled as a portraitist. His workshop produced many replicas of his works, but his style was so individual that his only followers were his son and a few forgotten imitators.
Posted by James at 2:51 PM

I hadn't heard much about this artist before. Only just come across your blog and think you cover a really good array of virtually unknown artists, thanks! :)

Thanks for your comment. If you would like to know more about this famous old master I refer you to The Metropolitan Museum of Art (http://www.metmuseum.org/toah/hd/grec/hd_grec.htm).