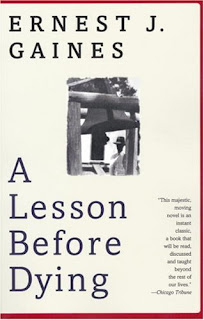 A Lesson Before Dying

Reading A Lesson Before Dying by Ernest J. Gaines was an inspirational experience. The lesson of the title is both demonstrated by the story and felt by the reader. This is a book that I would recommend to anyone who loves reading and life. Here are some moving quotations from the book:

"Do you know what a myth is, Jefferson?" I asked him. "A myth is an old lie that people believe in. White people believe that they're better then anyone else on earth -and that's a myth. The last thing they ever want is to see a black man stand, and think, and show that common humanity that is in us all. It would destroy their myth. They would no longer gave justification for having made us slaves and keeping us in the condition we are in. As long as none of stand, they're safe.

Please listen to me, because I would not lie to you now. I speak from my heart. You have the chance of being bigger then anyone who has ever lived on that plantation or come from this little town. You can do it if you try. You have seen how Mr. Farrell makes a slingshot handle. He starts with just a little piece of rough wood- any little piece of scrap wood- then he starts cutting. Cutting and cutting and cutting, then shaving. Shaves it down clean and smooth till it's not what it was before, but something new and pretty. You know what I'm talking about, because you have seen him do it. You had one that he made from a piece of scrap wood. Yes, yes - I saw you with it. And it came from a piece of old wood that he found in the yard somewhere. And that's all we are Jefferson, all of us on this earth, a piece of drifting wood. until we - each of us, individually- decide to become something else. I am still that piece of drifting wood, and those out there are no better. But you can be better.