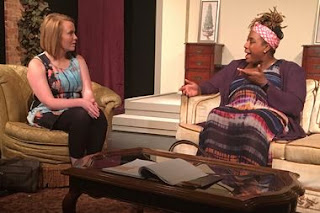 All Mixed Up
A comedy about love, betrayal, trust,
and the things that keep us apart
by John J. Enright

What appeal can a play about a lesbian couple who are expecting a baby have for a single white male in his sixties?  A lot more than I expected as it turns out.  Last Sunday I experienced this mixture of Humour and Drama from the pen of John J. Enright.  And I found it is appropriately titled "All Mixed Up".  Considering the playwright's not inconsequential experience writing Romantic Comedies (see "O'Brien and O'Brian") any question I might have had seems upon reflection to be, shall we say, questionable.

The play opens with a couple who's expecting and facing turbulent doubts about both the nature and the direction of their joint endeavor.  We meet Beth in the lobby of a hotel where Carrie, a white lawyer, who has a bit of attitude joins her.  Beth is a Black woman in the latter days of pregnancy, who is nervous about aspects of the endeavor that she has not shared with her partner.  We find out that they are engaged, but Beth is no longer wearing her ring and the trust that led to the engagement seems to have evaporated.  The play adds to this couple a somewhat officious Security Guard and the baby's daddy. The mix-ups that ensue for this quartet provide more than a little humour as further tensions abound.

I was impressed with the acting of both Taylor Mason X as Beth as she brought a believable combination of nervous energy alternating with a stressed out tiredness. Her difficulty in sharing the secrets she kept from her partner seemed to emanate from an uncertainty about the relationship that was visceral.  Her partner Carrie was a demanding and difficult character that Paige Taylor handled well.  Both Eric D. Fisher and Jillian Leff in the other roles proved more than able to contribute to the mixed up action.

I was most impressed by the way the plot made the title of the play clear in multiple ways. The direction of Denise Smolarek complemented this to yield a successful production. With the playwright's signature wit ever present and a realistic portrayal of difficult relationships evident the play was thought-provoking while providing ample measure of laughter.  Any question about the potential entertainment value of this play for myself had evaporated early in the first act as I enjoyed a moving and often mirth-filled evening of theater.

You raise a very interesting point about enjoying and getting something out of this play based upon your background. A worthy story is a worthy story. One reason that we read or watch literature and the performing arts is to connect with a common humanity. Think about how removed we are from some of the situations and settings that are framed in Shakespeare plays.

Brian,
Thanks for your comment. I enjoy reading and seeing a variety of literary works. This was one that I thought would be further outside my comfort zone than it turned out to be. It certainly contained situations that demonstrated the "common humanity" to which you refer. Your reference to Shakespeare is certainly apropos.