An Evening of Humor and Wordplay 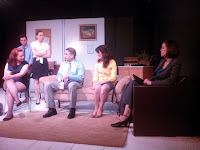 O'Brien and O'Brian
A Play by John J. Enright


Can two recent law graduates share office space when they are so different in temperament and personality that they cannot even agree on the appropriate spelling for their last names: O'Brien or O'Brian?  That is the main premise or at least the catalyst for the new romantic comedy from the pen of John J. Enright.  Following on his previous successes with "Ready or Not" and "Wild Flowers" his new play, "O'Brien & O'Brian" from Barely Concealed Productions provides more wit, complications, and laughter per minute than any play I have attended this year.
Dream Theatre on west 18th Street provides an intimate setting for this combination of wordplay and machinations both legal and erotic.  A potential client appears in the half-furnished office of our two young lawyers named O'Brien & O'Brian.  The client, Sam, appears with an urgent need of a lawyer, but which one will he choose?  His plight, an administrative hearing with a state EPA bureaucrat, is further complicated by his wife, an opinionated woman of Irish descent (with a quite convincing accent).  The edginess of their relationship is not the last complication and, as these multiply faster than you can say where is the Judge, there ensues a wonderfully wacky confusion of events that make this entertainment one that leads to laughter and delight of high order for the whole evening.
What sets this play apart is the wit and realism of the writing combined with great direction and acting.  Their are moments when the wordplay sparkles with enough wit to set your humor neurons on fire.  Each of the actors performed well, however Madelaine Schmitt as Darlene O'Brien and Bryan Hart as Alan O'Brian stood out as the leads with moments reminiscent of Tracy and Hepburn.  Nicole Roberts and Kate Donoghue were delightful with their Irish accents battling against the supposed "Irishphobia" of the EPA administrator played by Julie Soroko.  All the while the direction of Anna W. Menekseoglu kept the chaos of emotion and reaction of the ensemble on the stage under control.  The result is an evening of delightful humor with a message or two about the vagaries of love and life.
Posted by James at 6:49 AM